On April 28, 2021, President Biden introduced the American Families Plan to a joint session of Congress. The $1.8 trillion plan consists of $1 trillion in expenditures (e.g. education, childcare, family leave) and $800 billion in tax cuts for low- and middle-income families. One of the many ways the plan expects to pay for itself is by increasing federal tax rates on capital gains and qualified dividend income to 39.6% for households making over $1 million. Here are among the many questions we are hearing from our clients.

Some form of the bill is likely to pass and pass quickly. Not only do Democrats want to pass this bill before midterm elections potentially erode their position, the White House would like to have a new bill negotiated and passed by September 30th, 2021 when the FAST Act expires. The FAST Act, Fixing America’s Surface Transportation Act, provided long-term funding certainty for surface transportation projects was signed into law by President Obama on December 4, 2015 and Democrats want to extend its benefits. So, expect to see more proposal clarity by the July 4th recess following June hearings on the May 27th budget proposal. The bill is unlikely to be retroactive in light of ongoing economic stresses from the pandemic.

Raising capital gains taxes on individuals who earn over $1million is very likely to be included in the plan—although the increase is not expected to be all the way up to 39.6%. Such an increase would not only be the highest rate in over 65 years, it would effectively eliminate the incentive to hold investments for at least a year and potentially give rise to the desire to sell appreciated securities before the federal rate increases from 20%. 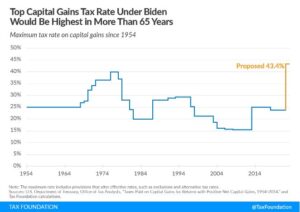 We expect pushback from the 39.6% level because although capital gains taxes have been raised many times in the past, increasing them to the ordinary income tax rate would be a significant departure from nearly 70 years of past practice. According to The Tax Foundation, the nation’s leading independent tax policy nonprofit, “Since 1954, the capital gains tax rate has almost always been lower than the top ordinary income tax rate. 1”\r\n\r\nFor decades, the US has sought to encourage long term investing. Passive income from capital gains is already effectively taxed twice, once at the corporate level and then again at the individual level. The chart below shows how the corporation you are invested in already pays income taxes which reduce your earnings per share. Then you pay capital gains tax on any increase in the price of those shares.

1 https://taxfoundation.org/biden-capital-gains-tax-rate-historical/. The exception to the rule was in the years following the 1986 Tax Reform Act, which taxed both ordinary income and capital gains at a 28 percent rate (by lowering the top ordinary income tax and raising the capital gains tax). However, this policy change drove a sharp decline in capital gains realizations (the selling of stock).

The Capital Gains Tax is a Double Tax on Corporate Income 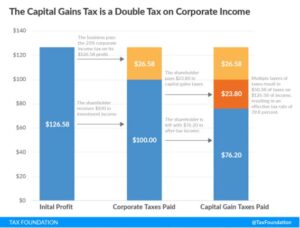 In addition, capital gains aren’t indexed for inflation—so some of the gain you’ve experienced is just maintaining your purchasing power not providing an increase in wealth. While we expect an increase from 20%, we expect it to be closer to 25%-29%. 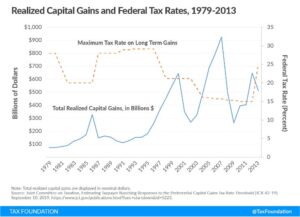 A well-telegraphed, significant increase in the rate on par with these two increases could therefore see an increase in capital gains realizations.

So, what are we advising clients? First, don’t panic. Capital gains tax rates have been raised many times in history. And markets have done well coming out of them. Looking at the four largest increases over the past 50 years, we can see that there has been little impact on market performance. In all but one case, market declines were limited to 3.4%. In all four cases, markets were up two years after the increase in cap gains rate.

Past performance does not predict the future but, as we are so fond of saying—trying to time the market for any reason is a fool’s errand. The good news from a capital gains tax rate increase standpoint is that the data shows the market impact has been minimal over time. It may make sense for you for your own reasons to realize gains but not simply to avoid a selloff.

Second, we urge you not to listen to the “cocktail party” or “talking heads” conversation. What you’ll hear often isn’t wrong but are generalizations—good ideas but not necessarily good for you. Far better to consider the cost/benefit options of various scenarios specific to your individual situation carefully. To do this properly, it’s important to look at your investments holistically—that means including all your assets-liquid investments and other assets within the context of a wealth management plan that includes your retirement, spending and legacy goals. This will help you identify tax saving opportunities and analyze the tradeoffs involved.

For example, unless the proposed step up in cost basis at death is also eliminated, it may be beneficial for you to delay rather than accelerate the sale of shares. On the other hand if you anticipate a large expenditure in 2022 or 2023, one that would put you over the $1million income threshold, you may want to accelerate that into 2021 since you are likely to fact higher rates in the coming years. Do you have a charitable pledge or ongoing intention that could bring you below the $1 million income threshold? Have you thought about making a charitable contribution directly from your IRA so as not to trigger any income? Have you looked into combining these with a Roth IRA conversion so that RMDs will not realize income in the future? These are tradeoffs that need to be thought through and analyzed for your specific situation. The right answer is different for everybody.

If selling to beat a potential selloff isn’t a good idea, should you sell simply to reset your cost basis? This too is a complex question and one that depends on your age, life expectancy, spending needs, income levels, and legacy goals for the next generation. If you are advanced in age and you expect the step up to be retained, you may wish to do nothing. On the other hand, if you are young and you don’t have a tax-aware asset location strategy, now may be the time to take action not only to reset your cost basis but also to move higher turnover assets into tax-deferred accounts. It may also be worth evaluating whether you can afford to change your overall asset allocation such that you earn less taxable income and still meet your wealth management goals. Gifting assets, either directly or through Trusts, now instead of upon death may also reduce your income while not affecting your children. There are lots of other trust and estate planning tools at your disposal that should also be evaluated.

The main message is that there is no “one size fits all” answer to these questions. Capital gains tax rates are likely to go up. The “right” response depends on your specific situation. Seek the analysis and input from your advisors and partner with them to find the  answers that fit your case. Since we’re nearly halfway through the year, it’s probably a good idea to reach out sooner rather than later.

Sign up to receive newsletters from Fischer Stralem Advisors

Thank you for subscribing our newsletter!

Thank you for subscribing our newsletter!